Review: May B. by Caroline Starr Rose 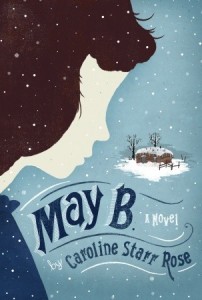 Face Value: This is a fantastic cover. In fact, this is a book I wanted to read because I saw the cover and picked it up in the bookstore. I can’t stop looking at it. Here we have a cover that looks both totally historical – no misconception that we aren’t on the prairie, but also totally hip. The silhouette, the falling snow, the homestead in the background. Plus, the use of illustration and silhouette, as opposed to photographs, let’s May’s face be visible, without projecting an overly specific visual of her to the reader.

Does it Break the Slate? YES. Mavis Elizabeth Betterly, or May B. is determined to survive and she uses her intelligence, resources, and resolve to survive a prairie winter alone.

But even outside of her fight to survive, May B. is a Slatebreaker. Here we have a young woman who can identify what she wants in life and takes steps to get there. Reading is challenging for her, due to her learning disability, but she doesn’t give up. She sees possibilities for herself outside of the confines of her situation, both literally, trapped in alone in the sod house, or on a larger scale, as a young woman facing a future on the homestead.

Who would we give it to? The audience for this book is pretty easy. Any self-respecting Little House fan will be swept up in the details of May’s life on the homestead and on the edge of her seat as the snow starts to accumulate. But for those who express interest in prairie life but can’t quite get into Laura Ingalls Wilder’s description-heavy prose, the crisp simplicity of May’s poems will make for a quick and easy read.

Review: May B. (short for Mavis Elizabeth Betterly) is sent away from her family’s homestead to help out a neighbor and his new wife 15 miles away. Seems like nothing to us, but 15 miles is world away in the endless Kansas prairie. Promised that her stay will be “just till Christmas,” May is still furious at being sent away, When she gets there she finds  a stoic farmer and his miserable new wife. Alternately demanding and indifferent, the Oblingers don’t make May’s time away from her family any easier. Then May finds herself alone. At first she rejoices in the freedom, but she quickly realizes that with winter coming and no one aware of her solitude, she has to figure out how to survive. Caroline Starr Rose uses elegant verse to capture both May’s internal monologue and the sparse, desolate nature of the landscape.

May is aware of her status, as a girl, and how that lessens her value to her family. As her family sends her, unwillingly, to the Oblinger’s farm, she ponders for only a moment:

Why not Hiram? I think,
But I already know:
Boys are necessary.

‘We’ll get you home by Christmas.’
A wisp of hair escapes her grasp,
encircling my cheek.

For the best,
one less child to clothe.

Knowing what is expected of her doesn’t make May any less furious. On the prairie everyone has to be useful and her perceived value to her family is less than her brothers Plus, she knows she’ll get even more behind on her studies in the months away from school. Despite May’s dreams of becoming a teacher, a learning disability makes reading a struggle, and she’s barely keeping up as it is.  The way this storyline – May’s simultaneous struggles with reading and devotion to education are seamlessly woven in, without ever feeling tacked on or issue-y. Things never get magically easy for May, but her persistence does pay off, and feels earned

One of the things that made May particularly believable to me was the plausibility of her initial reactions to her solitude. She goes back and forth between absolute terror and fury at being abandoned and rejoicing in her first taste of freedom without being told what to do by someone else. Take this passage, as she balances these emotional responses:

So many times I’ve wished for just a minute
to linger
before beginning chores,
or wished I could skip
the washing up after supper –
Now I can do what I want.

Even in her terror, May recognizes the rarity of her solitude, and what it means to be responsible only for herself for the first time. And ultimately when it comes time to survive, May absolutely has it in her. She finds food, she protects herself. She survives alone for months, with nothing but herself. She gets herself through the winter and she gets herself home. And ultimately it’s her journey that makes her realize how much she is – and will continue to be – capable of.

3 Responses to Review: May B. by Caroline Starr Rose