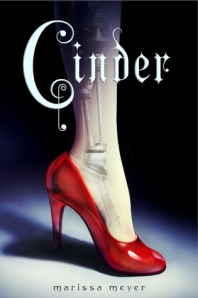 Face Value: It’s definitely striking. It’s this cover that caught my eye ages ago, and drew me to the book in the first place. I really like how stylized it looks – it looks like sci-fi, the cyborg element is just hidden enough to be eye-catching. I’m not certain how I feel about the glamor element. Yes, of course, I get the shoe thing. It’s Cinderella. It’s a very effective way of demonstrating to the reader some of the elements of the story. But in actuality, Cinder is a mechanic and her feet are uncomfortable. You wouldn’t catch her in a shoe like that.

Does it break the slate? Yes. Partially the slate is broken because of Cinder herself as a character – certainly she takes her life in her own hands (as much as possible) and partially because the book raises complex issues of identity, ownership and humanity regarding the treatment of cyborgs like Cinder.

Who would we give it to? One of my professors in graduate school was fond of telling us (with regards to theatre for young audiences productions), “You can do anything you want, as long as you call it Cinderella.” And to a certain extent he’s right – fairy tale adaptations have their devotees, and Cinderella is the quintessential fairy tale adaptation. This one, with its dystopian vibe and robot element, well, it’s hard to imagine it won’t be popular. I can imagine a ton of kids who would be immediately drawn in by this book.

Review: Cyborg Cinderella? Ok. That’s a gimmick that has my attention. This book has been on my radar for awhile, and I’m glad I finally got to it. First of all, this is by no means a straight up fairy tale adaptation – it doesn’t stick exactly to the original plot outline, and it looks like as we head into sequels we’ll move on from a lot of the traditional Cinderella plotline. Which is interesting to me as a reader – it means that the author is using folklore as a starting point for creating her own mythology.

The story begins as one would expect. Poor Cinder is alone in the world. Dead father, wicked stepmother. And she’s a cyborg (63.2% human, 36.38% mechanical) with no memory of her life before age 11 when she was taken in by Linh Garan and brought to New Beijing. But then of course, her adoptive father died of the mysterious Letumosis virus that has plagued Earth for years, and his wife despises Cinder. She has two stepsisters of course, the bratty Pearl and kindhearted Peony. She gets by as a mechanic but doesn’t seem to have many options for her future. Her biggest fear is being signed up for the Cyborg Draft, in which Cyborgs become test subjects for the always-failing Letumosis vaccines. But when Prince Kai, heir to the Earthen empire, stops at her mechanic’s shop and Peony falls ill everything changes, and Cinder is swept up in something much bigger than she imagined.

I always like seeing heroines who have legitimate skills, and Cinder is a talented mechanic. In a way that seems totally plausible and is backed up with consistent demonstrations of knowledge, not just “oh how cute, our heroine is an interior designer” or whatever. And instead of her meeting the prince being driven by balls, fancy dresses and missing shoes, he comes to her in need of her expertise and skill.

That said, I didn’t really buy the relationship between Kai and Cinder. I appreciated that wasn’t quite insta-love and wasn’t solely about physical attractiveness – Mayer does a good job of building up multiple meetings between the characters, different opportunities for them to interact. But we never really felt the depth of attraction between them beyond Cinder’s awe at meeting royalty and Kai’s appreciation of her mechanical services. But maybe that is enough – for now. We’ll see how it develops in the next book.

But actually, that didn’t matter that much. Because unlike many Cinderella adaptations, the romance was not the most important part of the story. Can you believe it? The romance is one part, one small stepping stone in a much bigger store, one about intergalactic political games and secret identities and individual rights. Rather than ending with a wedding, or even a kiss, we end with a step into a much bigger story. Sure, I saw the plot twist at the end coming a mile away. And while I sort of missed the opportunity for real surprises at the reveal, I also understood why Cinder hadn’t figured it out yet. And I’m excited to see what happens to her in the next round.