The Friday Society by Adrienne Kress

Genre: Historical Fiction/Action/Steampunk (is Steampunk a genre now? Call me out on it if that’s not acceptable) 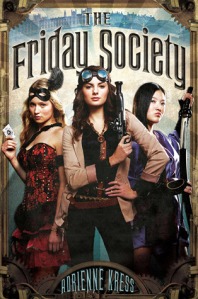 Face Value: I can’t say I’m particularly enamored with this cover, which looks a little too Charlie’s Angels to fit my particular tastes. But at least our three heroines look like they’re ready to fight and that they probably shouldn’t be messed with. I’m always into that.

Does it Break the Slate? Yes! Kress uses traditional tropes to build characters that stand up for themselves, question authority and society, and evoke a general sense of badass-ness. Sometimes the complexities are lost in the big picture, but the narrative, but the narrative consistently reflects a real commitment to questioning patriarchal societies and creating interesting female characters who threaten those systems. Cora, Nellie and Michiko are Slatebreakers to the core.

Who would we give it to? Not historical purists – Kress’s language can feel a little anachronistic at times – but definitely anyone who enjoys a feminist spin on history will find a lot to love here. If you like Y.S. Lee’s Mary Quinn series, you’ll probably like this one quite a bit.

Review: The Friday Society is set during a mildly steampunk version of 1900 London, and follows three girls: Cora, the lab assistant, Nellie the magician’s assistant, and Michiko, who is an assistant (but also basically an indentured servant/slave) to a combat instructor. At the start of the book, all three of them have overcome society’s expectations of them, based both on class and gender. Cora is an incredible scientist, with an analytical mind and practical attitude. Nellie is a gifted performer with a remarkable memory. Michiko is a trained samurai, with an amazing talent for combat. All three are incredibly skilled at what they do and their ambitions are rooted in being able to meaningfully use their abilities in the world.

All three of them are also great characters. In this post on Forever Young Adult, Adrienne Kress talks about her goal of subverting tropes by using stock characters and deepening them in her writing. I definitely felt that in her characterizations. These stories might start in stereotype, but each character is fully realized, with goals and flaws and interesting ways of looking at the world. Each section starts with an explosion (literal), but the point that’s being made really seems to be that all three are about ready to shake things up in the worlds around them. And since I kept going back and forth about which one was my favorite character, that in itself is a good thing.

When I first started reading, I cringed a little, at the way all three girls were indebted to the powerful older men who “rescued” them from a lesser life. But as the book went on, I realized that this was simply another trope that Kress was pushing against. Because even when these male rescue figures are kind, good people, their kindness is not enough. Even when these benefactors (like Dr. White and Raheem) are good people, the girls are not meant to be blindly grateful. As Cora explains,

“Yes, Lord White is the best thing that ever happened to me, but I don’t think I owe him servitude for life just because he rescued me as a child…surely what I’m capable of, my brain, my talent, surely that wasn’t meant to be just some assistant. Surely I was meant to be more, and do more.”

And when these men in power are not good people, their oppression is infuriating, but the girls are aware enough to push their boundaries and stand up for themselves. Over the course of the book, they come to realize that together, they are stronger and more capable of enacting change, both in their own lives and in society, when they work together, and the growing camaraderie between them is one of the most satisfying elements throughout the book.

The writing style is very contemporary, which is both good and bad. I actually really enjoyed the modern voice, and the way Kress openly embraces her characters modern worldviews all the way down to the vernacular. The setting is well researched, but the dialogue is very 2012 – talking about things like “making out” for example, which doesn’t really seem like a turn of the 20th century term. It’s fun though, and feels fun right from the very beginning passages, like this one:

“And then there was an explosion.

It was loud. It was bright. It was very explosion-y.

Cora dove under the table and held her breath, waiting for the thinkling sound of glass to cease. It could have been a nice sound, actually. If it didn’t reflect her total incompetence.

She’d fixed the calculations, she’d double-checked the equipment. How was it possible to change everything about an experiment and still have it result in the same thing?

That was the technical term for it.”

So, yeah, the language might not sound like it’s from 1900 London, but it’s absolutely engaging, and readable. I could see this being a show on the CW, maybe some kind of cross between Veronica Mars and Downton Abbey, with tough crime fighting girls, witty banter, period costumes and a fascinating exploration of social classes and gender roles at the turn of the century. Which I would definitely, definitely watch. In fact, can somebody who knows somebody get on that asap?

While I wait for it to become my new favorite television show, however, I am more than happy to have enjoyed The Friday Society as a piece of literature, and I look forward to the likely upcoming sequels.

2 Responses to Review: The Friday Society by Adrienne Kress