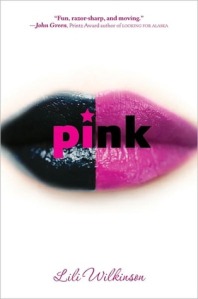 Face Value: This cover is eye catching, with the white background and giant garish lips. Yeah, they’re a little alarming, but the striking shades of lipstick reflect the inherent performativity of both extremes of femininity that Ava experiments with during the book, and the fact that both of these identities are more or less “painted on.”

Does it Break the Slate? The slate is snapped in half with a table saw and then doused in pink glitter and decorated with some Battlestar Galactica stickers. Somehow, fantastically, Lili Wilkinson has created this funny and relatable novel in which high school stereotypes of all kinds are challenged and gender, sexuality and personal identity are given a forum, all from an authentically written, likable teenage voice.

Who would we give it to? Smart kids looking for a progressive identity story. Anybody feeling confused about sexuality or identity or who they are and want to be in any other ways. Also, anyone who’s served on stage crew at some point.*

Review:  Ava is a non-conformist, raised by non-conformist parents. Her whole life has been about questioning identity, challenging cultural stereotypes and critically analyzing DH Lawrence. She calls her professor parents David and Pat, hangs black and white art prints on her walls and has a smart and sexy girlfriend, Chloe who she describes as being “the coolest, sexiest, most interesting person I had ever met.” Ava likes all of these things, but a part of her isn’t quite sure if that’s who she really is – or who she wants to be. Part of her is curious about what it would be like to be a joiner, to wear a pink cardigan, to maybe even kiss a boy? But she doesn’t know how to talk about any of this with Chloe or her parents so she comes up with a plan. She transfers to a highly academic private school so that she can try out a whole new identity. When she starts Billy Hughes she becomes friends right away with Alexis, a girl who embodies everything Ava hoped for in her new pink identity. But she also falls in with a group of stage crew misfits who confuse things even further.

This is a somewhat unusual feminist narrative. Let’s be real, we’ve seen far more stories where a character goes through the journey of the book to discover all of the things that Ava starts the story with. But feminism is about options, and celebrating all of the different ways of being feminine, and finding an identity that feels honest. So Ava’s journey, to let go of the things that make her comfortable and try something new, is a pretty brave one. It’s not easy to go against the people that you love, but sometimes you have to do it to figure out who you are. Of course, sometimes when you do something that the people you love might not like or understand, you do really stupid things in order to hide it from them. Ava does some really stupid things in this book while she’s trying to figure out what she wants. But I love the way that her moments of stupidity were handled! Of course people do stupid things when they’re trying to figure out who they are. And then you have to deal with the consequences! But Ava is pretty great about apologizing, recognizing her mistakes and then moving on to the next one.

At first, I felt like a lot of the characters we met who weren’t Ava were kind of stereotypical. Chloe is this archetypal pretentious hipster intellectual lesbian who talks to Ava’s hippie parents about feminism and Existentialism, smokes cigarettes and “read battered Penguin Classics she found in thrift shops and at garage sales. They were all by people like Anaïs Nin and Simone de Beauvoir and made her look totally intellectual, particularly when she was wearing her elegant horn-rimmed glasses.” And Alexis, the tiny, perky popular girl and her trio of followers seem to all too easily fit Ava’s imagined version of perfect pink femininity, “petite, perfect girls” who “all matched, in a clothing catalog kind of way. Our stage crew is stereotypically dorky when first described. Ava’s early impression of Jen (the only girl in the group) is as follows:

“She had no style at all. Her braces were the old fashioned metal kind, not the unobtrusive, porcelain ones that most kids had. She was utterly graceless, awkward, and gangly. She should have been miserable and lonely. All of these people should have been miserable and lonely. A disheveled Asian boy. A fat, curly-haired boy with dorky glasses. A boy dressed like Johnny Cash. An awkward sci-fi nerd. A ginger-haired loser. Outcasts.”

But! Instead of merely disputing stereotypes, Wilkinson embraces them, understanding that the root of these stereotypes is less of an inherent personal truth and more of a persona that people put on, to try to place themselves in the world through one particular worldview. She understands that there is no place where this kind of “trying on” of identities is more present than in high school. As teenagers we try on these identities and fully embrace the stereotypes around them because we are trying to figure out who we are, and it’s a whole lot easier to perform this idea of who we are (or who we want to be).

When I was in high school, at the beginning of every school year I would go clothes shopping with my mom and I’d have this fantasy about how, if I just bought the right things, I could totally transform my identity. I would think how I would walk into school dressed just exactly right, I would suddenly be welcomed into the “right” group or recognized as a totally interesting and unique individual. I mean, seriously, I wore broomstick skirts and peasant blouses for the better part of two years, trying to prove to the world that I was A Serious Artist. I cannot get those years back. But at least I know I was not the only one trying to pull that kind of crap (even if other people maybe managed to get a decent haircut while they were doing it).

But I digress. May I talk about Judith Butler for a moment?

For those of you who haven’t had the privilege/ordeal of slogging through Gender Trouble, Judith Butler is a brilliant, significant and often headache inducing gender theorist. One of her major concepts is the idea that all identity is performative, including gender. In our daily lives we are constantly “performing” gender through what we wear, how we speak, the way we walk or move – it’s all part of constructing a very specific identity that our society and our particular cultural contexts has dictated for us. So whether you perform gender by wearing frilly pink dresses and curling your hair like Alexis, or fishnets, pencil skirts and a whole lot of black eyeliner like Chloe, or heavy jeans and oversized unisex Battlestar Galactica t-shirts like Jen – all of these choices contribute to your very specific performance of gender identity. As you might imagine, these theories are pretty relevant to this particular story, as the characters in this book are all making very specific choices as to how they perform gender. Ava, having recognized that her identity might be a socially constructed performance, replaces that performance with a different one. But it’s still a performance, because all gender is inherently performance. It doesn’t mean that either, or any of these performances are bad. It just means that they don’t define who we are, they define the society that constructs them. So it’s not until Ava gets past the trappings of these identities that she can really start to figure out who she is and what that means.

Throughout the book, the color pink becomes this fantastic symbol for Ava’s different performed identities and for her journey of discovery. After all, pink is a seriously loaded color when it comes to performing female-ness. It means something very specific to a lot of people and becomes particularly loaded when it comes to the culture of little girls over the past fifty, or even ten years (just read Peggy Orenstein’s book Cinderella Ate My Daughter for some deeper insights about this). And it means something very different to many of the characters in this book. For  Ava, pink is way more than just a color. And by choosing to take it on as part of her identity represents rejecting something much more than her old clothes.

If anyone, by the way, is getting a little anxious about the fact that this is a book about a self-identified lesbian who kind of wants to kiss a boy, don’t worry too much. Without giving everything away, I will tell you that this is a book about questioning identities, and sexuality is part of that. Wilkinson does a wonderful job of depicting the confusion surrounding sexual identity when you’re growing up and coming into these things for the first time. This isn’t a perfect book. But it challenges gender identities in a way that really changes the conversation. And that, my friends, is seriously Slatebreaking.

*If the stage crew aspect of the book is appealing to you, then can I strongly suggest you go find yourself a copy of A Love Story Starring My Dead Best Friend by Emily Horner? Also a great book about discovering sexuality. Also featuring stage crew. Also incredibly awesome.