Face Value: Patriotism! Cursive! Stars! This cover screams baseball, apple-pie, and good ol’ US American wholesomeness. It does nothing to reflect the actual personality of main character Samantha Madison. The cover, in my opinion, doesn’t fit the story at all.

The hardcover design that I got from the library is better than the paperback, however. Check this out: 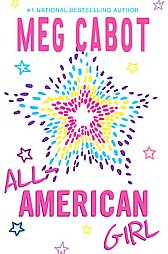 A pink and purple star of fireworks. Oh my goodness. I suspect Lisa Frank was involved. Samantha Madison would puke all over this cover.

Does it break the slate? You know, I didn’t expect it to break the slate for the first 2/3 of the book. But by the end, the slate was broken. All-American Girl is definitely a love story, but it’s a love story in which a girl learns to make an informed choice about who she wants to be with. That choice is a young man who respects her the way she is and doesn’t ask her to compromise her beliefs or preferences for the sake of their relationship. There’s also some sisterly love in the story, in which Samantha’s sister Lucy proves that their bond as sisters is more valuable then any superficial bond Lucy might have with a boyfriend. Although the sisters didn’t get along that well, there was an admirable sisterly love and respect present.

All-American Girl is also slatebreaking in that it ponders the idea of bravery and what it means to be a brave girl. Although Samantha tackles a would-be assassin, she still considers herself a coward compared to her best friend Catherine, who had the guts to ask out a boy. All-American Girl examines different kinds of bravery, and what it means for a girl to be publicly brave and privately brave.

Who would we give it to? This book is perfect for anti-establishment girls who have never been kissed, or sullen teenagers who think that life is just sooooo unfair. (Although you might have to wrap that patriotic sparkle-pants cover in brown paper to get them to read it.) Also, anyone who has a fascination with Washington D.C. or the White House. When I was in high school, I was enamored with Washington D.C. and wanted to move there for college. I still sort of want to live there, so I loved the minor references to the city peppered throughout the book.

Review: Unlike many aficionados of young adult literature, I have not read much of Meg Cabot’s work. I read The Princess Diaries when I was young, but I am otherwise unfamiliar with her books. I wasn’t sure what to expect when I read All-American Girl. I figured it would be my kind of story because it was on the Bitch Media “100 Young Adult Novels for the Feminist Reader” list – but the heinous cover had previously deterred me from reading. In honor of our Slatebreakers Meg Cabot theme week, I did my best to ignore the cover and enjoy the story inside.

To my surprise, this story was not the candy-coated tale of teeny-bopper romance that I expected it to be. Our leading lady, Samantha Madison, has a major attitude problem. Sam is frustrated with her family, frustrated with school, frustrated with adolescence, and frustrated with life in general. She struggles with her school’s social scene – a situation made even more painful by the fact that her gorgeous and smart sister Lucy is universally adored. Samantha’s pessimism was getting on my nerves for a while. She is just so dense. She is so self-absorbed and worried about her own little injustices that she cannot see the world clearly.

Ok, that doesn’t sound very good. I’ve started off this review by trashing the main character. But wait! This is why I think that Meg Cabot is some kind of genius. She’s created this character that we love to hate. As a reader, I just wanted to pull Samantha Madison out of the story, grab her by the shoulders, and give her a good talking-to. Cabot builds and builds this frustration until everyone in the story is frustrated with Samantha, too, and then boom! Samantha finally achieves some clarity, realizes how obtuse she’s been, and makes changes. It’s a very satisfying transformation.

One of the key figures in Samantha’s turnaround is the delightful Susan Boone, art instructor. Susan has long white hair, a talking bird, and a no-nonsense attitude about teaching. She is patient with Sam and gently guides her to see what’s really going on around her. I adored Susan as a character. Even though I can barely draw stick figures, I wanted to take her class.

Meg Cabot has a gift for the humorous. And it’s snarky humor rather than the laugh-out-loud variety. For example, enjoy this passage, from when Samantha’s parents learn that she is drawing pictures of girls at school with celebrities and then selling them for profit:

“Because,” I explained, “Justin has less hair.”

This little gem of an excerpt brings me to my one big complaint about this book. This book is lousy with late 1990s and early 2000s dated references. There is at least one dated pop culture reference on every page. Sam’s best friend Catherine is totally in love with Heath Ledger, which is kind of awkward to read about now given that he is no longer with us. (But there is no way that Meg Cabot could have foreseen that, so I tried not to let those references get to me.) I worry that the dated material might make this book less appealing to girl readers in 2011. This is why I always become concerned when an author includes a lot of of-the-moment names or references in their book, because then it doesn’t translate as well for future generations of readers.

All-American Girl is a light and fun read, but it’s still interesting and offers an eventually empowered character for girl readers to admire. If this book were a snack, it would be popcorn – still a whole grain, a little bit nutritious, but delicious and fun.