Review: Inside the Shadow City by Kirsten Miller 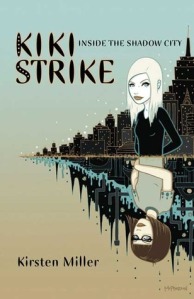 Face Value: The dual image of the girls and the city is very intriguing, and I can see how it would appeal to readers. This cover is mature enough to appeal to adolescent readers, but accessible to the older middle school readers that I think could really love this book. The bold and clean graphics work well together to convey an air of mystery and danger.

Does it break the slate? Thoroughly, and with style. Kiki Strike and Ananka Fishbein break the slate with their fists. The girls in this book are highly skilled, bright, business savvy, and keenly aware of the world around them. They are everything that I wanted to be as a girl and that I am still working to be as a woman.

Who would we give it to? I would give this book to the bookworm types who are kind of quiet and might struggle in gym class. Ananka is the perfect heroine for these girls, because she makes the transition from quiet girl in the background to smart and powerful leader. She also feels uncomfortable in her own body at the start of the book and has to come to terms with what it can do for her.

Review: This book kicks butt. Well, to be more accurate, it kicks shins and abdomens, because what I learned while reading is that if you are a pint-sized superspy the most effective way to defend yourself against an adult male is to direct a powerful donkey kick straight to his legs or lower torso. Kiki Strike delivers a few punches throughout the story and rather than being gratuitous violence, it is enormously satisfying.

Although this is the Kiki Strike series, I see Ananka Fishbein as the true hero of this book. She narrates the story and experiences a major transformation from timid to slatebreaking. I adore Ananka because she is just the right balance of skeptic and idealistic. She has an insatiable desire to explore the Shadow City, but she realizes that safety must take priority over the lure of adventure and treasure.

Ananka’s transformation from mousy student who hides behind her books to confident leader of the Irregulars is a believable change – much more believable than most adolescent girl transformations in books and movies. It’s not the makeover that makes her feel like a confident leader, but the leadership role and increased confidence that make her feel like she deserves a makeover. I totally respect that. The source of her power is not the clothing and makeup. It’s the respect of her peers. (Wow, even just typing those last few sentences made me want to stand up and cheer.)

Ananka ranks high among my favorite feminist girl characters because she arrives at her feminist observations rationally and naturally. Here’s her innate feminism emerging as she is being interrogated by the police:

“And just what, may I ask, was a girl your age doing wandering around Chinatown in the middle of the night?”

“Don’t you know that it’s dangerous for young women to be out alone after dark?” His gruff voice had assumed a fatherly tone that made me want to vomit – preferably on his shoes. I’ve always wondered why strangers feel they have the right to offer this kind of advice to girls – or why they don’t seem to be as concerned about boys. I struggled to reply in a civil tone.

“It’s dangerous for everyone, sir. Not just young women. Now, if you would stop interrogating me, I’ll be happy to tell you what I know.”

And this is just one of the many situations in which Ananka shares her feminist views. Whenever she encounters someone who treats her like a second class citizen just because she is a young girl, she handles it with aplomb. Rather than punching them in the face or screaming with frustration, she calmly proves them wrong by demonstrating how clever, capable, and mature she really is. Honestly, I should take a few lessons in remaining calm from Ananka.

Of course, although Ananka is the true hero of this story, we must pay homage to the mysterious and fascinating Kiki Strike. She too is a physically and emotionally strong girl who can take care of herself. Although she has some issues with working effectively in a team, Kiki’s supreme skills in sleuthing, political intrigue, and the martial arts make her a heroine worthy of fangirl adoration.

You know who is not worthy of any adoration? All of the girls’ parents. The parents of the girls in The Irregulars are either absent, clueless, or outrageously overprotective. Of course, the parent characters have to be that way in order to make the story work out, but it’s still irritating to read about such dense parenting choices.

I was surprised by the amount of research that Miller must have done to write this book. It is packed with detailed information about the layout of New York City. I’m not a huge fan of NYC, but I wish that I had read this book while on vacation there because it filled me with the urge to go exploring. It also reads like a handbook because each chapter ends with a how-to for girl spies. Topics range from creating masterful disguises to taking down an attacker twice your size – and all are geared specifically for the teen girl reader.

This book is slatebreaking from front cover to back page. I am thrilled by the power and intelligence that Miller has invested in her young female characters. I will definitely read more about The Irregulars and their adventures.