Review: The Trouble with May Amelia by Jennifer L. Holm 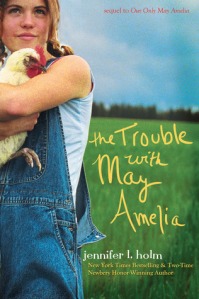 Face Value: Yikes. This cover is pretty bad. I mean, on the one hand, I appreciate that I can see the girl’s face. But on the other hand, this stock photo of a girl holding a chicken photoshopped over a nondescript landscape doesn’t speak much to what actually happens in the book. If you needed any more clues about how unexceptional this is, look no further than this upcoming tile from Egmont:

And the worst part of this cover? A closer look at the girl reveals not only overalls with undeniably contemporary stitching and buttonholes, but a pink bra strap. It’s 1900 and May Amelia is the only daughter in a family of boys that’s barely getting by in a tiny logging town. Are you kidding me with this? You would think that a sequel to a Newbery Honor book might merit more thoughtful and appropriate cover art.

Does it Break the Slate? Yes! May Amelia is dictionary-definition Slatebreaker (well if Slatebreaker was in the dictionary anyway). Cover aside, we’re dealing with a fantastic main character here. May Amelia is tough and loyal and in possession of a remarkable work ethic and enough good humor to survive being the only girl in a family full of boys.

Who would we give it to? If you like historical fiction, you’re almost guaranteed to like this book. Jennifer Holm has a remarkable gift for crafting historical novels and anyone who read and liked Our Only May Amelia, Holm’s first book about this character (based on her own family history) will enjoy hearing more of her story, but you don’t need to have read the first book to enjoy the second one.

“We live on the Nasel River in the state of Washington. It is 1900 and I Am in Trouble Again.”

With these words, we are drawn into the word of May Amelia Jackson. If you read Our Only May Amelia, you know that May Amelia is the youngest child and only girl in a Finnish family full of boys that farms along the Nasel River in Washington State in the late 19th/early 20th century. Picking up more or less where the first one left off, this book documents more of May Amelia’s triumphs and struggles as she fights to define her place in her family.

Jennifer Holm is one of the best in the business when it comes to writing historical fiction. Her research shows through, and her writing evokes a real sense of another time and place. But she also does this in a way that is incredibly readable and genuinely compelling and relatable for contemporary readers. The fact that much of her historical fiction draws upon her own family histories is an added benefit, and I love the idea that it could get young people interested in looking into some of the stories that exist within their own families, sparking multigenerational conversations. Additionally, I can’t help but be impressed with Ms. Holm’s versatility. Her Babymouse series (with Matthew Holm, reviewed here: link) are funny, contemporary graphic novels that represent an equally high quality and drastically different middle grade offering.

May Amelia is in an unusual position for a girl of her time. Being the only girl in a family of boys when all hands are needed to work the farm for the family’s survival, she is a tough kid who can fight, climb trees, fish, do farm work with the best of them. There are literally no other girls her age in the community, at home or at school, so May Amelia is raised to be both one of the boys but with the added expectation of being a girl. She does farm chores and plays as hard as her brothers do, but she’s the only member of the family expected to help her mother with cooking and domestic chores. She tells us,

“Wilbert is always telling me that I need to find my sisu or I will never make Pappa proud of me. Sisu is a Finn word that means to have guts and courage. i want to say that it is very hard indeed to have sisu when you’re the only girl on the Nasel.”

She’s right. It’s far from easy to be the only girl on the Nasel, when there’s no model of what kind of person you’re supposed to be or what it means to be a girl. It often seems to add up to a lot of insults and unfair expectations, whether it comes to traditional girl’s roles or traditional boy’s roles. Take this exchange:

“Pappa, if we get rich, can we get rid of May Amelia and get a new girl? Ivan asks. One who can cook good?’
And mend clothes, Alvin says.
And clean, Ivan says
And knit socks, Alvin adds.
But I do all those things already! I say.
If we get rich, we can get a new girl on one condition, Pappa declares.
What’s that, Pappa? Kaarlo asks.
He gives a slow smile and says, She’s gotta not stink like a cow.  The boys hoot with laughter and Kaarlo pounds on the table.
Isaiah turns to me and says, I think you smell real good May Amelia. But then, I sure do like cows.”

However, May Amelia is no delicate little thing to be brought down by mere teasing. She gives it back as good as she gets it. When one of her classmates embarrasses her, she concocts an elaborate scheme to get her revenge, leaving him wearing a dress for a school day. And, as it becomes clear throughout the book, all that teasing from her brothers is deeply rooted in a whole lot of love. So May Amelia perseveres.

Her patience is tested though, when her cousins Jaakko and Helmi arrive from Finland, following their mother’s death. Three year old Helmi is instantly beloved by the entire family. “All the boys dote on her, picking her up and tickling her just to hear her giggle. It’s like they’ve never seen a little girl before.” Even May Amelia’s father is charmed, bringing her presents and playing with her. May Amelia has to contend with the mix of love and jealousy she feels for Helmi. She wants the comraderie of another girl, but it’s hard to deal with this child, whose experience with girlhood is being treated so markedly different from her own. It’s not that May Amelia wants to wear dresses and be coddled – that’s not who she is. But with another girl in the family, her own experience with girlhood is called into question, and that’s a challenge. Another little girl also brings up the deep emotions related to her baby sister Amy, whose birth and death transformed May Amelia in the first book. Watching May Amelia deal with these emotions, and come to terms with who she is in the family is a profound part of the book. It also raises some really interesting questions about what it means to be a girl in this time and place that will resonate deeply with contemporary young readers.

But still, May Amelia’s father is horrible to her. Truly horrible, in a way that is devastating, and hard to forgive. On the first page of the book, May Amelia tells us that “Pappa  says I’m Just Plain Stupid because I Never pay Attention and that he would rather have one boy than a doze May Amelias because Girls Are Useless.” And it goes from there. Throughout the book we hear insult after insult, culminating in what I found to be unforgivable. I don’t want to spoil anything for you, so I won’t go into specifics, but when disaster strikes the family, May Amelia’s father turns against her completely. In that, this book brought to mind this article from Elizabeth Bird’s blog about redeeming villainous parents.  I’m curious about what those of you who have read this book think. Does May Amelia’s Pappa deserve his redemption?

However, while this is a story about May Amelia, it’s also a story about her family, all of it’s flaws and struggles, and the way they ultimately find a way to survive together. The ending, regardless of how I felt about her father, is moving and powerful. And yes, it’s May Amelia who brings the family back together, and by the end of the story we see her coming into the strength that’s been a part of her identity since the first page. As readers, of course, we knew she was capable of this, but it’s nice to see her family realize it too.

1 Response to Review: The Trouble with May Amelia by Jennifer L. Holm