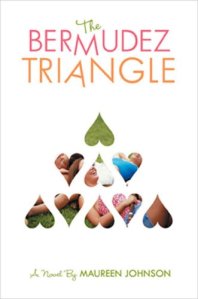 Face Value: This one has a very subtle cover design. Cutaway hearts in a triangle formation give us a glimpse of three girls casually lying in the grass. They look happy, it’s cute, and it looks good on a shelf. No complaints here.

Oh, did I mention it comes in a “splashproof” edition? That’s right. You can get a version with a waterproof cover that can withstand your beach reading habits.

But then there’s the paperback cover…

Goodness, did those cover designers even read the book? The Bermudez Triangle is about friendship evolving as you grow up. It is not the most cheerful story in the world. There are hurt feelings and breakups and painful moments. So, why all of that pink and purple? It looks like a sleepover and nail-painting manual. Also, this book features three female characters who have to learn to be mature through situations that make them want to flip out, and that super girly cover undermines the inherent maturity of the story.

Does it break the slate? Smashes it, actually. In The Bermudez Triangle, Johnson does an amazing job crafting the arch of two summer romances as they heat up and cool down. What I love most is that these relationships (one heterosexual and one homosexual) have many parallels in their ups and downs, and readers see that there are more similarities in the relationships than there are differences.

Who would we give it to? I think this book would be a good fit for readers at the end of their time in high school. It’s a time when friendships change drastically because everyone’s life is heading in a different trajectory, and it would be comforting to read about a friend group that found ways to work through the changes in their relationship and still support each other.

Review:  To be fair, The Bermudez Triangle isn’t exactly a summer book. Most of the story takes place during the school year, when Mel, Nina, and Avery reform their friendship trio after a summer apart. At first I questioned whether it was even appropriate to write about The Bermudez Triangle during our Slatebreakers Summer Books week. After some thought, however, I realized that The Bermudez Triangle is actually the perfect book to review during Summer Books week because it takes a good, hard look at what happens once the summer is over and we have to go back to reality. The romance and sense of opportunity that come with summer quickly dissipate once the school bell rings in September. Not all summer-y books address the potential for summer romances to have messy endings when the season changes, but The Bermudez Triangle tackles this with admirable honesty.

Nina, Mel, and Avery have been best friends forever. They rarely spend time apart, especially during the summer. Although the girls have vastly different family situations and have grown into disparate social groups, they manage to stick together and support each other in everything. Until this summer. Nina has enrolled in a summer leadership program at Stanford, breaking apart the trio for the very first time. While Mel and Avery start their new jobs as waitresses at a dismal themed restaurant, Nina is off being intellectually challenged and meeting a boy who will change her world.

Nina comes back from her Stanford summer with a long-distance boyfriend and the weird feeling that her friends don’t really like her anymore. Unbeknownst to Nina, Mel and Avery felt a new connection over the summer. They realized that they were attracted to each other, hooked up, and started dating – although they have been keeping their relationship a secret, even from their best bud Nina. When Nina catches them making out during a trip to the mall, the perfect friendship triangle breaks down. As the girls cope with this change in their relationship, everyone makes mistakes, and it becomes a complicated mess.

Nina really wants to be accepting of her friends’ romance, but she cannot stand that they kept it a secret from her. Mel wants Avery to commit to their relationship so that they can go public, but Avery is still exploring her sexuality and isn’t ready to assign any labels. And in the middle of all this, a new friend joins the mix: Parker, a coworker from the restaurant. How do you turn a BFF trio into a quartet?

I love, love, love Maureen Johnson for never sugarcoating any of these conundrums that the girls encounter as they navigate their changing world. It is never easy to adjust when friends evolve or grow apart, and Johnson includes every uncomfortable, awkward moment of the whole thing. Nina has to confront her own prejudices and prioritize whether she would rather tell the truth or protect Mel’s sensitive feelings. Avery has to decide whether she wants to continue a romance that doesn’t feel quite right simply because she wants to avoid an awkward breakup. Nina faces a choice between a flawed but dreamy long-distance boyfriend or an easy, comfortable relationship that just doesn’t light her fire. We experience each girl’s thought process as she works through the tough stuff, and we witness the moments of bravery and the moments of weakness. These girl characters are fully realized, with great strength and deep regrets.

Mel was the character that most surprised me. She is soft-spoken and ultra feminine, yet secure in owning her identity as a gay woman. I love the scene in which she finally admits to herself that she is a lesbian and tries on different labels to see which fits. When she looks at herself in the mirror and says out loud, “I’m gay,” I was so excited for her. Her coming out process is rocky, but Mel maintains remarkable self-confidence despite the lack of support from her family and community.

Johnson maintains this bittersweet realism all the way through the book. Although the girls manage to work out some of the kinks in their friendship, nothing is totally solved. We still have loose ends as the book closes, and that’s exactly how it should be. No friendship is ever perfect forever – it takes work to maintain those relationships, and we finish the book knowing how much work is ahead for Nina, Mel, and Avery.

The Bermudez Triangle features three amazing character – all very different, yet all with traits that will engage readers from a variety of backgrounds. I saw a little bit of myself in each girl and I think that other readers would probably say the same thing.  These young women are flawed, sure – but they are so willing to try again, so willing to make sacrifices and compromises for the sake of their friendship, that I cannot help but feel motivated by their energy. I was reminded that although the summer may seem like a magical time separate from reality, the choices we make during the summer will have an impact year round. This summer book left an impression that will linger long past the warm-weather months.

Reviewed from a library copy