Review: I Shall Wear Midnight by Terry Pratchett

I Shall Wear Midnight by Terry Pratchett. Doubleday, 2010. Currently available. 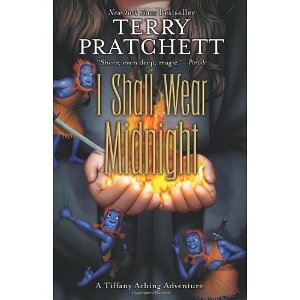 Face Value: I’m afraid to admit this, but…the cover is too “fantasy” for me. Fantasy is not a genre I typically read, but I make exceptions for Sir Terry. There’s definitely a headless female on this cover – that’s a pet peeve of mine, so it’s difficult to ignore that. And the wee blue men, who frankly look like cartoons, don’t really add to its appeal. If this cover didn’t say “Terry Pratchett” on it I would not have given it a second glance in a bookstore or library. This is the case with most fantasy covers that I see. Let’s give those fantasy books a makeover! In my opinion, more readers might cross into the fantasy genre if the covers didn’t have such a cliché look.

Does it break the slate? This is such a Slatebreaking book. My husband read Wee Free Men, as well as several of the Discworld books about witches, and has been telling me for ages that I would enjoy the feminist themes that emerge in those stories. My favorite Discworld plots were in the City Watch and Moist von Lipwig lines, so I never bothered to pick up the others. I am so glad that I finally did, because Tiffany Aching (the central character of this book) is one of the most Slatebreaking characters Terry Pratchett has created yet.

Who would we give it to? There are a gajillion Terry Pratchett fans out there, and I would give this book to them, but they’ve probably already read it. So, who would enjoy this book other than someone who is already a Pratchett devotee? I Shall Wear Midnight is an excellent “gateway” book to the fantasy genre because Discworld bears many resemblences to the world in which we live. Yes, there is magic and tiny leprechaun-like creatures and a fairly rigid system of nobility, but the Discworld novels tend to be palatable even to those who don’t enjoy reading fantasy often. I would not describe myself as a fantasy reader, but I read one Discworld novel and was hooked. And even though this book is the fourth in the Tiffany Aching line of Discworld novels, I have not read any of the others and I think it stands alone quite well.

Review: Before I even start talking about the book, I want to talk about the author. Sir Terry Pratchett is a prolific writer. He has written 39 books set in his fantastical Discworld. I Shall Wear Midnight is the 38th. (Note that I said there are 39 Discworld books…he has written other books outside of the Discworld setting too. The man is a machine.) Now, when an author writes that many books and publishes so frequently, one might question if the quantity truly allows for sustainable quality in said books. I doubted that they were very good, simply based on the fact that there were so many of them to shelve back when I worked at a library. But then I read one.

To my surprise, it was good. It was great, actually. It was titled Monstrous Regiment, and it was gender-bending and provocative and funny and terrifically written. So I read more. Nine Discworld books later, I still love Sir Pratchett’s wit and the way that he writes female characters who just as nuanced and compelling as the male characters. It’s no wonder that 39 books into the Discworld series, he is still winning awards for his writing. I Shall Wear Midnight received the Andre Norton Award for Young Adult Science Fiction and Fantasy in 2010, among other honors. When Sarah and I were planning a Slatebreakers week related to the Norton Awards, I jumped at the chance to read the Pratchett title on the list of winners. Come back on Friday to read more about the Andre Norton Award and how the honorees are selected!

Tiffany Aching is an adolescent girl who bears a great deal of responsibility as the resident witch in The Chalk (the rural area in which she lives). She cares for the sick, looks after those who most have forgotten, and diffuses conflict before it can cause too much trouble in the community. Most of her work involves common sense and logic. Yes, she is able to work with magic, but it’s really not necessary most of the time. Magic is really only useful in extreme situations. And being an early career witch, Tiffany finds herself in a surprising number of extreme situations.

One of the greatest challenges that Tiffany faces on a daily basis is the judgment of her neighbors. She is a typical adolescent girl with a home and a family and even some mild romantic aspirations. Yet the people of The Chalk do not trust her. She is a witch. She has powers and thoughts that they will never comprehend, and thus she can never truly fit in among them. Tiffany wears her pointed hat with pride – or is it defiance? – as she attends to her duties. She knows that no one understands her. Rather than trying to fit in, Tiffany does her work with zeal and challenges the status quo.

Tiffany is simply brilliant as a female character. She’s smart and confident, but she has her moments of self-doubt, just like anyone would when faced with such great responsibility. She often feels like she’s the only person in The Chalk who sees any sense at all in a situation. She also has such wonderful intuition. Throughout my reading, I desperately wished that I could have been more like Tiffany when I was sixteen. She is exactly the kind of YA heroine that I search for in the stacks of books I read each year.

Another thing I love about this book is that it is technically YA but it really has very little difference in tone from the other Discworld novels I have read, which are marketed to an adult readership. Pratchett writes with the same biting humor that he uses in his books for adults. Some of my favorite parts of Discworld novels are the rude bits. Pratchett writes about sex, bodily functions, and other embarrassing things with this lovely frankness that is funny without being gross. That was all still present in I Shall Wear Midnight, even the references to “passionate parts” – i.e., genitalia. Nothing has been scrubbed clean for younger readers. The protagonist simply happens to be of a younger age than most Discworld central characters.

It has been a while since I have read one of Pratchett’s books, and this novel renewed my love of Discworld. And now I have a new character to be excited about! I plan to work backwards and read all of the Tiffany Aching stories, and maybe even a few from the witch series too. For an old British white guy, Terry Pratchett writes refreshingly feminist fantasy.

Reviewed from a library copy.

2 Responses to Review: I Shall Wear Midnight by Terry Pratchett