Use Your Gray Matter: Amelia Bedelia Does the Time Warp

When I was growing up, I was fond of Amelia Bedelia. As a kid with a predilection for language and words, I thought that a character who took everything literally was absolutely hysterical.  I remember Amelia Bedelia looking like this:

A few years ago, I encountered Amelia Bedelia in the bookstore once again – but she didn’t look like the character I remembered. Instead, Amelia Bedelia looked like this: 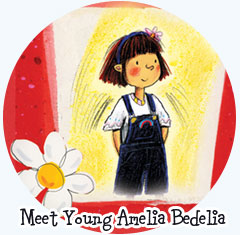 At first I thought I was imagining things, but further research proved that it was true: Amelia Bedelia had done a time warp. Somehow, although years had passed, she had gone from a grown woman to a little girl.

When the original series author Peggy Parish passed away, her nephew Herman Parish stepped up to carry on the family legacy. Part of Herman Parish’s contribution to the series has been to create a new branch of Amelia Bedelia stories, focusing on her childhood. These new books feature a girlish, energetic young Amelia Bedelia who perplexes her teachers and friends with her literal interpretations of language.

There are so many elements of this character change that confuse my Slatebreaker sensor. Some changes, I think, are good. I am glad to see that Amelia Bedelia is no longer a domestic employee of a wealthy couple. Although she was good at her job and much beloved by her employers, I was troubled by Amelia’s status as a housekeeper. That, combined with her perceived silliness, did not make her the kind of female character that I aspired to be. Yes, I thought the books were funny and I enjoyed reading them, but I did not want to grow up to be Amelia Bedelia.

The new Amelia Bedelia still has the same literal-mindedness, yet it is conveyed in a different way.  She is a girl who keeps the adults in her life on their toes. In a way, it is refreshing, because adults have to constantly re-evaluate their use of language when they are interacting with her. I like that Amelia Bedelia often has the upper hand over adults.

What I don’t like about the “new and improved” Amelia is that there is an increased focus on femininity in the way she is portrayed. She’s a little girl and there’s nothing wrong with illustrating her as such. Yet the focus seems to be on how cute she is as a funny kid. I found this post by illustrator Lynne Avril on the Greenwillow Books blog:

I am troubled the emphasis on clothing and outer appearance. Amelia Bedelia is, in this image, converted to a paper doll.

I’m still pondering the implications of this Amelia Bedelia revamp. Fellow readers, please chime in. What do you think of Young Amelia Bedelia? Do you know any young reader fans of the new Amelia? What might this mean about the overall climate for female characters in picture books? Chime in with your comments!

This entry was posted in Use Your Gray Matter and tagged Aging, Amelia Bedelia, Picture Books, Series. Bookmark the permalink.

1 Response to Use Your Gray Matter: Amelia Bedelia Does the Time Warp