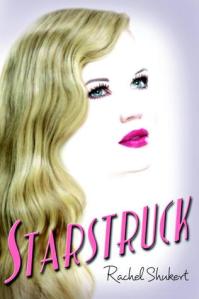 Face Value: I totally get what you were going for, cover artists. But it doesn’t work. I feel like this illustration is trying to evoke both a contemporary feel (giant girl’s face staring out at you from your book cover) and an Old Hollywood silhouette. But something about the aesthetic of the airbrushing makes it not quite come together on either level.

Does it Break the Slate? Yes…but also no. Sometimes. Here’s the tricky thing – I know Rachel Shukert set out to write a feminist YA novel, which is awesome. But I’m not sure that this book came together in a way that truly challenges expectations, or gives us characters who are up there with our slate-shattering heroes. While I appreciate that there are complexities to these storylines that hint at the darker demands of Hollywood glamour, this first book in a planned trilogy doesn’t quite go deep enough, in my opinion, to give us fully realized characters as opposed to stand-ins for a particular type of drama. Reading her post on Jezebel, I definitely feel like Shukert wrote this book with feminist intentions in mind. That said, this is her first piece of YA, and there’s a little bit of a twinge of “let me tell you how it’s done, YA writers and readers,” without a full appreciation for the complexity of the young adult canon. There’s a whole lot of feminist YA out there, as we talk about on this blog every week, and I’d love to see articles like this in major forums coming from some of the other great writers we review on the blog on a regular basis.

Who would we give it to?  This is an easy read, and pretty fun overall. If you have a reader who’s interested in old Hollywood and the film industry, there’s a good chance they’ll find it enjoyable.

Review: It’s 1938, and Margaret Frobisher’s life has just changed forever when she was noticed by a studio executive and offered a contract with Olympus Studios. Now Margo Sterling, she is suddenly the studio’s next big star. Conveniently, the former big star, Diana Chesterfield, has mysteriously disappeared and Margo steps into her former roles, both onscreen and off.

We’re also introduced to golden-voiced Gabby Preston, who grew up in vaudeville with an overbearing stage mother and is now trying to make it big in film, and Amanda Farraday, a former escort who plans to leave her sordid past behind with a screenwriter boyfriend and a career on the stage.

There is drama, of course there is drama, and it folds out in alternating narratives between Margaret, Gabby and Amanda. The curvy Gabby is under pressure from both the studio and her mother to lose weight, and ends up hopelessly addicted to pills. Amanda is constantly afraid that her past will be exposed to the public or worse, to her boyfriend Harry. And Margaret’s exquisite beauty leads to her success, but she can’t stop thinking about what happened to the tragically disappeared Diana Chesterfield.

There’s also an alluded to plot about Margaret maybe being the secret daughter of Olive Moore, the madam who took in Amanda before she made it big? I assume we’ll hear more about this later. And Margaret’s parents are snooty WASPs who disown her for signing the contract with Olympus but didn’t seem to like her that much in the first place. And Margaret’s friends from before can’t understand her new life. And Margaret is madly in love with her costar Dane Forrest, but the studio has different plans, and what was the deal with him and Diana Chesterfield anyway?

I’m all for campy fun, especially period campy fun, but the melodrama felt a little forced at times (especially the big reveal about Diana’s whereabouts and why). On the one hand, it exposes a darkness to the glamor of the time that was probably very present, it still perpetuates a victimization narrative without any sense of agency for the young women at its core. And while I think that playing with familiar tropes (the impossibly beautiful ingénue, the ‘cute as a button’ young singer with a weight problem and diet pill addiction, the bombshell vixen with a scandalous past) is a potentially great way to explore bigger dynamics within a genre, these characters don’t quite get to the point where they transcend their expectations.

So as I finish this review, I realize that I can’t quite give a Slatebreaking stamp to this novel. But I don’t think it’s anti-Slatebreaking either, and there’s real potential in the narrative that’s being created. I’m curious and hopeful to see if these characters grow outside of their tropes as the drama unfolds in the next two books of the trilogy.