Face Value: We definitely know we’re in Oz by the signifiers = blue checked dress, silver shoes. The stark writing over the image hints at the story and is engaging. I like it.

Does it Break the Slate? Yep. Danielle Paige has not only crafted a complicated, villainous and horrifying version of Dorothy Gale, she has given us a strong new hero in Amy Gumm. Plenty of terrific female characters populate this book.

Who would we give it to? Devoted fans of the Oz books will either love this for its research and attention to detail or be horrified, but my bet is the former. If you didn’t know the books outside of the first one, or if your knowledge of Oz was mostly Judy Garland-based, I don’t know if you would enjoy it as much.

Review:  I loved The Wizard of Oz when I was younger. In second grade, I read all 14 Oz books, and was fond of pointing out to other people the inaccuracies of the movie (in the book, I would explain to anyone who would listen, the shoes were silver not red there were more witches and they had to go on a whole different trek through Oz, etc. etc.). My sister and I had a Barbie doll set of all the different Oz characters and we would enact the story throughout our house. Though I remained loyal to the books, I also watched Return to Oz, the much darker adaptation of two of the later books, with a young Fairuza Balk, dozens of times. I still have nightmares about those heads. 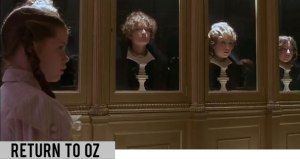 My point in all of this, is that I am definitely the target audience for this book. I was totally impressed with the level of detail that Danielle Paige included here, and not just from the major recognizable characters either. Minor Oz folk, like Mombi the witch, Cayke the Cookie Cook, Polychrome, the Patchwork Girl – they all make really fascinating appearances throughout the story, and are woven into the fabric of this world just as seamlessly as they were in Baum’s original version. Jellia Jamb makes a particularly strong appearance.

The story is pretty straightforward. Another Kansas girl, Amy Gumm, survives a tornado with her house landing in Oz. But this isn’t the Oz she knows about from the stories. This is a horrifying version, in which Dorothy Gale returned to enact a reign of terror on the whole place. The Scarecrow experiments on people’s brains, The Tin Woodsman leads an army of assassins and The Lion massacres villages, feasting on their fear. It’s gruesome, and Paige doesn’t shy away from that. But layering on this level of horror into the magical place that we’ve all read about works really well – it’s incredibly twisted, but fascinating.

Amy isn’t just a passive observer either. I liked seeing her come into herself throughout the course of the book, and seeing her truly realize the repercussions of her actions adds a layer of complexity to the adventure story.

So all of this is really great! The disappointing piece, which I actually just found later, as I was writing this review, is that that this book was published through James Frey’s book factory. I wasn’t as well versed in this as I should have been, but here’s a thoughtful analysis of his business model. What do you all think about that? Are you boycotting? My feelings are mixed on this, and I’d love to hear your thoughts.