Face Value: There is major attitude on this cover. A close look at the facial expressions of the girls reveals serious scowling and smirking. Drama ahead! I couldn’t wait to read about the events that caused such sour expressions on the girls’ faces.

The cover artwork brings The Baby-Sitter’s Club into the 2000s. The girls’ personalities are evident: Kristy’s got her sporty style, Claudia has a purple streak in her hair, Stacey has all-pink outerwear, and Mary Anne is as preppy as ever. I love that even in their updated clothing I could easily identify who was who. Overall, this is a very appealing cover look that 9-year-old me could not have resisted. I would definitely have gotten this through my Scholastic book order*. Who am I kidding – I couldn’t resist this cover as an adult. I checked out all of the Baby-Sitter’s Club graphic novels that were on the shelf at my local library.

What I like most about this cover is that the updated clothing and overall styling of the girls should have some longevity. I think this book could look current up until the 2020s, when we will probably be wearing silver unisex spacesuits and “reading” via implanted computer chips or something.

*Why is there not a Scholastic book order for grownups?!

Does it break the slate? Yes. Mary Anne is notoriously timid and unsure of herself, and this is the first time in the series when she chooses to assert herself. She reacts with grace and intelligence in a high-pressure situation. Mary Anne’s terrific handling of a baby-sitting emergency shows the parents of Stoneybrook that they can trust these girls to be mature, responsible, and fun when baby-sitting their kids. That’s slatebreaking behavior, for sure.

There is also a slatebreaking element to the whole notion of  Baby-Sitter’s Club. It’s very impressive for these pre-teen girls to get together, form their own business, develop a plan of action, and effectively provide their services to the community. And although they have their tiffs (like the fight that is central to this story), they always work through it for the sake of friendship and good business practice. Raina Telgemeier’s update of these savvy, entrepreneurial girls can inspire a new generation of future female CEOs.

Who would we give it to? I would give this to any girl who just finished her Red Cross Baby-Sitting Safety Course. Or, any elementary school girl anywhere. The Baby-Sitter’s Club has such wide spread appeal, I wouldn’t hesitate to share it with anyone. This book would resonate especially well with those timid, shy girls – like me growing up. (Yeah, I was totally a Mary Anne.) This graphic novel version could be an appealing choice for a struggling reader, because the dialogue is supported by detailed pictures throughout.

Review: I never expected revisiting this series to be such a joy. It was so much fun to read this story again, but in a new and visually exciting format. Telgemeier and Martin have come together to create a dynamite re-imagining of the series that has given it fresh new life. I can’t wait to read the other volumes that I brought home from the library.

In Mary Anne Saves the Day, the story is told primarily from Mary Anne’s perspective. We get a glimpse into her frustrating home life. Her father is very strict, and she can’t stay out as late as the other girls in the club or wear her hair in any way other than childish braids. Combined with her shyness, other people often view Mary Anne as a little girl. She is fed up with this because she knows that she is responsible and deserves more recognition for her maturity.

When a few choice words are tossed around at the weekly BSC meeting, the girls in the club get angry and stop speaking to each other. This is particularly painful for Mary Anne because her best friend Kristy is the most mad of everyone, and at school she feels like she has no friends. She meets Dawn, a new girl from California, who becomes a great support throughout this time of conflict.

The fight among the club members plays out, and Mary Anne proves her maturity to her father when she expertly handles a baby-sitting emergency. Eventually she gets some of the recognition that she needs, and the club gets back together. (Of course.) And Dawn becomes a new member! Also, there are some sparks flying between Dawn’s mother and Mary Anne’s dad…hmmm…I wonder what will happen there? (Insert girlish giggling here.)

I love the modernized, streamlined aesthetic through which the graphic novel presents the story. The images are so evocative that they do the work in telling the story, with dialogue playing the supporting role. I am already a huge fan of Telgemeier’s work, but what is especially admirable here is the way that she captures the awkward emotional roller coaster of the pre-adolescent years. The girls are fighting throughout, and their dramatic facial expressions, seething faces, and rolling eyes add a high level of tension to the story. When you are in 7th grade, fights get really petty, with lots of silly and mean things traded back and forth. It’s all there in Telgemeier’s excellent illustrations.

The girls’ personalities shine through in the pictures, rather than verbal descriptions. We know that Claudia has a major junk food habit because she is munching on snack cakes and other contraband treats during the meetings in her room. Stacey’s sophistication comes through in her always perfectly done hair and clothing. Kristy’s body language around the other girls suggests that she is in charge. Mary Anne often sits with her shoulders hunched, trying not to draw any attention to herself. It’s these little details that capture the charm of the original stories without having to say anything about these character details through narration. Here is one of Telgemeier’s drawings of the club, which totally captures the essence of each girl: 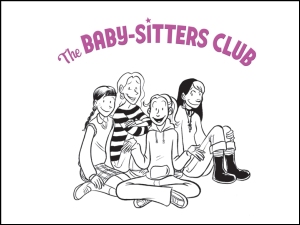 The only residual early 90s cheesiness was a smattering of “aw, shucks” dialogue peppered throughout the book. For example, here is Mary Anne’s introduction of Stacey:

“Stacey’s so glamorous. I’ve love to be like her some day. She even manages her diabetes with style.”

Seriously? I guess it’s hard to show diabetes in an illustration.

I am thrilled to see how the girls of the BSC have moved into the 21st century. They have the same distinctive and quirky personalities. Although the storylines are taken from the original series, they feel contemporary. For readers who enjoyed the BSC when they were young, the graphic novels will be a fun trip down memory lane. Young readers meeting the BSC for the first time will be intrigued and want to read more.